Oscar and I participated in our third game jam, Ludum Dare 30! The theme of the game jam was “connected worlds” and both of our entries were for the 48-hour competition.

Once again, we had a blast! It was frantic and crazy and that’s part of the fun. We also learned a lot, which I think is a big part of the “jam” format.

As a refresher, a “game jam” is an event where you have a limited amount of time to make a video game from scratch. In the case of the Ludum Dare competition, we were presented with a theme when the game jam started, and then we had 48 hours to come up with a concept, design the artwork, and build the game using tools of our choice.

Oscar used Scratch for developing his game. Its a cool drag-and-drop web tool that allows him to create complex games without having to type out all the code. Instead, he pieces it together with little lego-blocks of code. I used Flash, FDT, Illustrator, Photoshop, Audition, GarageBand, Unity, and Blender.

Every game jam we’ve done together has been a great opportunity to learn about ourselves, our tools, and how to mange making something pretty complicated in such a short amount of time.

For Oscar, he continues to have no trouble instantly coming up with a concept and diving right in. It’s pretty inspiring to see and reminds me that I should do the same.

The challenge for Oscar is getting all the details in, especially when he is nearing the finish line and he just wants to submit the work and be done. Bug-fixing, making game play clearer for players, refining the story – all these things require patience and focus and it is great to see Oscar grow and take on these challenges.

Oscar’s big revelation in this game jam was with the tools themselves: he learned a new approach to the programming – broadcasting! – which really changed his thinking and made building his game a lot smoother.

Oscar also really grew in his game development chops: the level design was a lot clearer, so players knew what to do right off the bat. He also included two types of game mechanics – a top-down style maze mechanic, and a platformer mechanic (which was SUPER hard to build in scratch, congrats for conquering that Oscar!).

I also continue to learn about myself in these game jams. This time around, I was putting a bit of pressure on myself to come up with something that fit the animal themes I have been using for past game jams. At some point I realized that to really create something special, I had to let go of that constraint (48 hours to create a game is constraining enough!) and just focus on making something interesting and fun. Coming into the game jam with any preconceived notions about what I want to make is actually a huge hinderance (great life lesson there, everyone)!

I also really wanted to try some new tools in this game jam, so i started building the game using Unity and Blender 3D, but that was a big mistake for me, because i didn’t have enough time to learn the tools so that i could really do what i wanted to do with the game i was making. About half way through the jam, i had to rebuild the entire game in the tools i knew. This is a reminder that the point of the game jam is not really the tools, but the game: its creating something interesting, playable, and maybe pushing some boundaries in the design of the game – not the tools. Learning new tools is fun, but not during the game jam, so just go with what you know best and focus on game making!

As usual, once we found out the theme, I started by writing down a whole bunch of ideas that came to mind. Whatever i might have learned in the week, interesting things that came up in conversations – anything I might have encountered in the week leading up the jam, will find itself in a concept for a game! I would have loved to continue using animal themes, as i did for the last two game jams, but i realized that there was this space taxi idea that was much clearer in my mind in terms of how it would play out, so i went with it. Once i decided on the space taxi theme, i began sketching, researching, and creating the artwork. I quickly settled on a look and feel, mostly based on my previous style of using flat shapes and a limited palette of colors.

Oscar immediately got an idea and just ran with it. This is his usual MO and i love it! He doesn’t second-guess, he doesn’t linger on various concepts, he just gets an inspiration and follows it. He began with setting up the story of the game and the began to build out the game play. By the end of the night he already had the intro screens of his game working, and was developing the maze mechanic for the first level of the game. I was itching to get started some on the 3D modeling – I had some ideas about adding dimensionality to the game and so I jumped into Blender 3D (a 3D modeling tool) and created some low polygon triangulated spheres that give a nice “faceted” look to the game. I debate with myself on weather i really go this route as it entails a bit more time creating the art assets than i would probably use going with a simpler, flat look. I then jump into Unity (a 3D game development tool) and begin building out the game. Now, i have built a previous Unity project for a client and have done several test projects in the tool, but i realized i was not comfortable enough (not yet) in Unity to really build quickly. When faced with what was about 30 hours of game jam left, this is not a good sign. i spent too much time looking up how to do things on the internet, testing out various plug-ins for the tool, and generally losing a ton of time not getting very far. I did manage to get something working but when it came to getting the planets to look the way i wanted, i got stuck! I didn’t have the time to really dive into learning all the details of UV-mapping (a way of wrapping images around 3D surfaces) and i had wasted too much time trying to. At about 5pm, i had to stop the Unity and Blender work, and i broke out my tried and try tools and began rebuilding the game from scratch… OUCH! Oscar started Saturday off with continuing the maze part of the game. He tweaked how the maze worked, how the artwork of the maze was drawn (he is appreciating vector art a lot more!) and worked pretty solidly until that part was done. Oscar’s next challenge was the platformer part of the game, which he quickly discovered, is really hard to build in Scratch. Now a days, lot of the tools used to build games have frameworks built into them that make game building faster. So, for example, if you want to build a platformer game (like Super Mario Brothers) many of the game tools let you put the “platforms” on the screen with the graphics you want, and then you define a “player” character, and the framework automatically adds logic to the system so that the character can jump onto the platform, or move under it, etc. For Oscar’s game, no such framework exists, so he spent a lot of time figuring out how to tell the system “when the character is in the air, and there is a platform there, then he shouldn’t fall back to the ground” etc. Mind you, “air” and “platform” and “ground” don’t mean anything to the system either, he had to tell it what those are too.

It was a hard challenge, but in the end, Oscar found a way of making it work.

5pm was the end of the game jam, so Sunday is typically really frantic!

I was still up from Saturday night and making really good headway. At about 2AM, a strange cat came into our garage and really freaked me out, and that kept me going until about 3AM. At about 3:20AM, the house started to shake and i realized it was not a large truck driving by the house, but an earthquake! 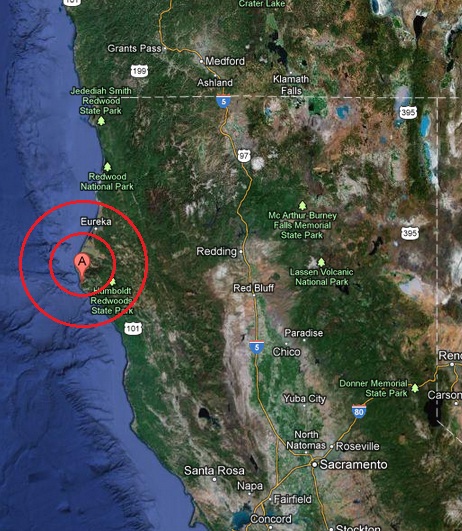 Thankfully we were OK, ad i decided to get some sleep!

When i got up again, i spent the day contenting to flush out the game play and get as far as i could. I realized i wouldn’t be able to get all the details in that i originally hoped i would, so i concentrated on the base-level mechanic (an alien hails cab, requests a destination plant, and you have to find that plant). Things like points and timers and power-ups would have to wait. I then jumped into creating the music and sound effects for the game, and if i had more time i would return to the visual details and game play… which of course, I didn’t! It was a race to the finish, i have about 10 minutes to spare, uploaded my game, and submitted my entry!

At some point during the game jam, Oscar and I had discussed some of the complexity he was wrangling and how this created some bugs in the game (“bugs” as in parts of the game that were not working!). This lead to him discovering “broadcasting” in Scratch, which is a different approach for controlling the logic in the game, and so Oscar re-tooled much of the game to embrace this new methodology and this solved a few of the big issues he was having.

Oscar spent the day finalizing the game play and really getting the game to work without bugs – which is tedious enough when you are an adult making a game, but for a 9-year-old, this is BOOOOOOOOOORING. Oscar really stuck with it though, and worked on creating sounds for his game – which he really loves to do. He uses his voice, things he finds around the house, and does some editing to come up with sound effects that work for him.

He then submitted his entry and was excited to embark on the last big step of the gam jam: playing the other games in the competition!

Well, another gam jam has come and gone. It was loads of fun and we learned a lot and we cant wait until the next one!