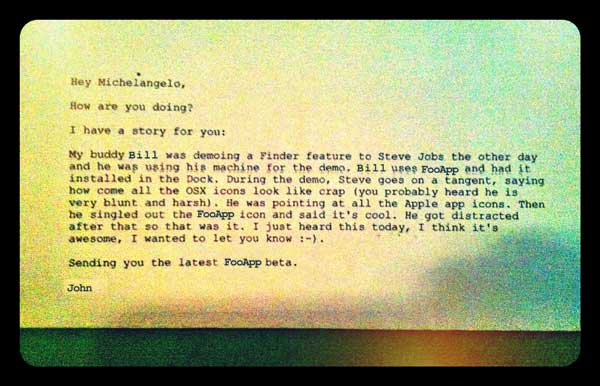 Steve Jobs has passed away.

It’s an interesting feeling, this dull bruise that sits in my chest today. I feel that I’ve lost someone close, someone so important. I don’t think I have ever felt this for someone I didn’t actually know in person. It’s sad to see such greatness extinguished, to see someone with such impact move on.

He worked for his dreams, for his vision. He shot for the moon and made it happen. People lost faith in him many times, but he didn’t lose faith in himself. He is the shining example of what I think we all need – belief in ourselves.

As part designer, part developer, part artist, I have always been a little hard to place. I have struggled to find my way when all the signs and expectations point to a rigidity to choose a profession. I started company after company to discover that it was hard to find people that got me – that got my curious mix of talents and interests – even when I was trying to lead.

But Steve got it. He understood from the earliest days if him tinkering in the garage with Wozniak, that these machines can’t only be technical marvels, they need to be artistic. They need to be creative while allowing others to create. They need to appear simple, even though they hide tremendous complexities. From time to time he would say in his keynotes that Apple is the intersection of technology and the humanities. In the face of all the engineering-focused Silicon Valley companies, Apple delivered artistic machines.

Why? Because it was what he believed in. And that is the biggest lesson I take from him: believe in yourself, in your ideas, unflinchingly. Don’t worry what others think. Be the eccentric.

Although I never met Steve Jobs, he has met my work, in a very tiny way. I had made an icon for a colleague working at Apple, and one day Steve went on one of his famous tirades, this time about how he thought all the icons in OSX were bad. Then he singled out my icon and said he thought that one was cool. My colleague emailed me shortly after to give me the news – Steve Jobs liked my icon! What was it? It was a red orb with a cursive, lowercase “e” it. It was very simple. Really simple. But it worked for the app. It worked for Steve. He appreciated simplicity and something crafted delicately.

In a time where I am learning every day to trust myself more, to believe in my own vision, my own dreams, and to focus on them, we have lost a supreme example, one of the greatest heroes of dream followers that I know of. To honor his legacy is for me to continue to pursue my own intentions, unflinching in my determination. Be the eccentric. Be me.

Thanks for the lessons Steve.